By now you must be aware of the fact that Beed is a historically renowned place with a very interesting history. It is due to this that the district is home to some of the most popular and oldest historic monuments which are also common tourist spots.

Beed’s history has seen the emergence and downfall of the Yadava dynasty, the Mughal dynasty and of course the British rule. Although the British barely any architectural contributions towards this specific district, the Yadavas and the Mughal contributed significantly to Beed’s historic architectural heritage. Beed in Maharashtra may not have too many monuments like many other tourist spots in India, but the ones that were constructed here are significantly popular.

There are mainly four recognizable Historic monuments in the district of Beed as listed below:

Hutatma Smarak at Rakshasbhuwan: Rakshasbhuwan is an important place in the historical background of in the region of Beed. This place was the battleground for a very important tiff between Nizam Usman Ali and the Peshwas of Maharashtra which was skillfully won by the Peshwas.  The tomb of Hutatma Smarak was built to pay a tribute to all the warriors who participated in this battle and lost their lives. The tomb is located at Rakshasbhawan in Georai within the district of Beed.

The tomb is surrounded by a 375 meter compound wall with only one entrance gate and the entire structure covers an area of about 8700 sq. Meter. It also has a library with all essential amenities which covers about 2000 sq. feet area. The entire structure is maintained by PWD along with a hall of 1200 sq. feet assigned for Mural Painting.

Mohammad Tuglak Tooth Samadhi, Karzani: Located only about 5 kilometres from the Beed-Solapur National Highway 211 towards the south of Beed in Karzani, the tomb of Mohammad Tuglak’s Tooth is placed on a small mound surrounded by the scenic beauty of nature. The significance of this tomb rests in the fact that apart from Tughlaqabad in Delhi, it is the only other monument which stores the remains the Muslim King Mohammad Tughlaq in the country. This historic monument is in a ruined state and in need for renovation; therefore it is under the preview of State Archaeological department of India. This monument is quite close to the Yuva Shantivan and the religious Manmath Kapildhar. It is also a popular picnic spot due to its natural surroundings and a special sunset point making it one of the most popular tourist attractions of Beed. 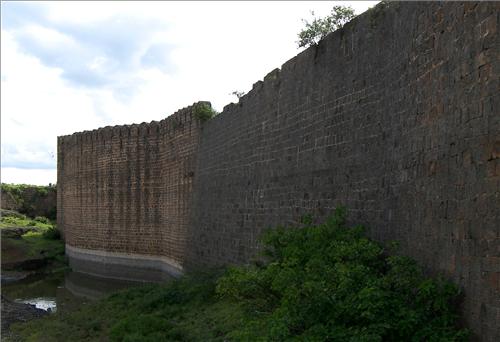 Dharur Fort: The Dharur fort is probably the only fort in the entire district of Beed. It is built on the Palghat hills and is naturally protection by valleys surrounding it on all the three sides with a moat, referred to as ‘Khandak’  built in the front side to protect it from conquerors. Since the land here is plain, a double protection wall was constructed for additional security. The main entrance of the fort facing the eastern direction is also protected by two massive fortress walls on both the sides. A narrow pathway through the gate leads to an open ground and next to this, the Jama Masjid is also located which has a Persian inscription on its entrance gate. Apart from this, the fort contains certain structural remains of a Water Tank, Barud-khana (explosives storage) and Rang Mahal where musicians and dancers used to perform during the rule of the Mughals.

The fort is about 80 kilometers in the south-east direction, from the town of Beed in the sub-urban town of Dharur situated on one side of the settlement of the town. This fort has been declared as a State protected property and is quite close to a number of temples in Beed.
Other than this, the fort also contains structural remains of Barud-khana, Water tank, Rang Mahal etc. Dharur fort is now a State Protected monument. 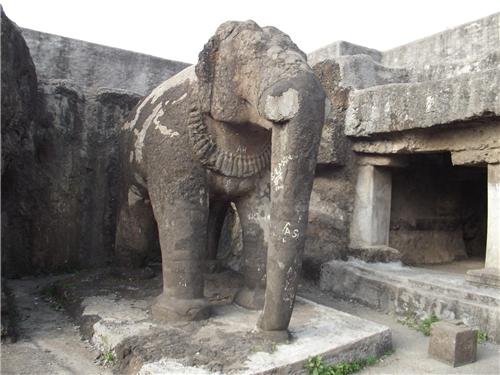 Hattikhana (Jogai Sabhamandap Cave) – The Hattikhana caves are the only caves located in the district of Beed in the Ambejogai town. This town is situated at a distance of about 95 kilometers from the city of Beed in the south-eastern direction. The Jogai Sabhamandap Cave which is a part of the Hattikhana caves built along the banks of the Jayanti River. Usually caves are semi-circle in shape but the Hattikhana caves are square in shape, which were carved deep within the hills. The entrance is at the southern side of the caves which also has a Mandap, which may also be referred to as a courtyard or platform covering an area of 8.36 meter square. The entrance has two large elephant statues that are facing the entrance of the caves which inspired the names of the caves their name- Hattikhana meaning ‘Elephant Caves’.

The centre of the caves has a stage referred to as ‘Nandi Mandap’ with the idol of Nandi- the cow God and the accomplice of Lord Shiva. The inscriptions found within the caves seem to be dated around1066 and maintained by the Rastrakuta king Udayaditya, which is now maintained by the State.The caves have a paved road and a large compound wall with a single gate for entrance.
For tourists, these are some of the must-visit places in Beed, which is known for its historical heritage.