Beed is a rarely talked about district in Maharashtra with a long and interesting history. It has been a part of India and different kingdoms of India since almost a millennium. In spite of existing for such a long time, the first official mention of the city in writing in the History of India was in Firishta. This book, officially known as the Tarikh-e-Firishta was a Persian History book written by a famous Persian-Indian author in the 17th century.

This book consisting of some of the rarest historical accounts also has an English version, translated by John Briggs in the name of ‘History of The Rise of Mahomedan Power in India’. 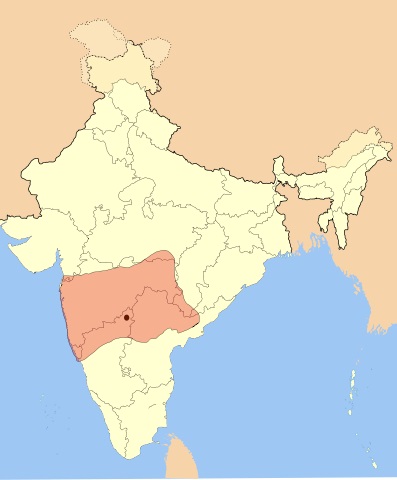 The existence of Beed, based on archaeological evidences, dates back to as early as the year of 1173, when it was apparently ruled by the Yadavas, who belonged to Devagiri, currently known as Daulatabad in Maharashtra. But there are different accounts about the origin and history of Beed.
One account claims that this district existed during the time of the Pandavas and Kauravas and was known as Durgavati. This name was later changed to Balni. Following the capture of the city by King Vikramaditya, he named it after his sister Champavati as Champavatinagar.

It is only after this that it was captured consecutively by first the Chalukyas, then the Rashtrakutas, the Yadavas and finally by the Muslim rulers which lasted till the British spread their rule across India.
Another account says that the district existed since the time of the Yadavas from the year 1173, who were the original inhabitants of the region for almost 2 centuries, now known as the state of Maharashtra, until after 1317. By 1317, it was taken over by the Nizams of Hyderabad and became a part of the state of Hyderabad.

In this account it is also mentioned that Muhammad Bin Tughlaq, had named the city ‘Bir’ which in Arabic meant wells, after he built several forts and wells in and around the city. Some historians also say that it derived its name due to its location at the end of the Balaghat range. Since such a location gave it the look of a hole at the end of the range, it was termed as Bil, meaning hole in Marathi as well as Hindi. This name later became corrupted and started being used as ‘Bid’ with time.

As per another account, the city was named by a Yavana (referring to a foreigner as per early Indian literature) ruler as Bhir, which meant ‘water’ in Persian due to its abundance of ground water at that point of time. This name later became the present Beed. These are some of the theories that make the actual story behind the origin of the name of the city, quite hazy. Although most people, from a logical reason perspective consider the second account as the original reason behind the name.

The Yadavas, as per historical facts, seemed to have ruled the district from about 1173 up till 1316, during which time they had also built the Kankaleshwar Temple, which is the oldest and most popular temple of Beed.

In 1317, the Muslim rule began with the capture of Devagiri from under the Yadavas by the last Khilji, namely Qutb-ud-din Mubarak Shah. This rule lasted till 1320 when Ghiyas-ud-din Tughluq took over which subsequently passed over to Muhammad Bin Tughluq who ruled the district for quite a long time with assistance from his governor Juna Khan. Juna Khan contributed largely to the development and welfare of the city. He even constructed a wall to change the course of the Bensura river passing through the district as it was the cause of floods, even then.

In 1347,there was an attempted capture of the district by Bahmani ruler- a rebel named Hasan Gangu, the founder of the Bahmani Dynasty. But his attempts failed when Muhammad Bin Tughluq subdued the rebels and re-captured his capital Daulatabad and the district of Beed, which was a part of the capital. But this lasted only for a short while as the Tughluq king had to divert his attention to a different rebel that broke out in Gujarat region. Hasan Gangu again captured Daulatabad and Beed and it remained under his rule and flourished until Humayun Shah Bahamani, one of the most cruel kings, Beed had ever seen, took charge.

When his brother Hassan Shah and a feudatory of Beed rebelled against him, they were both put to death, after a fierce fight near the Kankaleshwar Temple. Hassan Shah, was actually fed to a hungry lion after his capture.

Between the years of 1600-1858, Beed was thrown into the hands of and snatched away from many rulers. There was also a continuous battle between Nizam Shahi and Adil Shahi rulers, who were both rulers of parts of Bijapur.

In 1598, it was captured from Chand Bibi by the Mughals, then it was taken over by Nihang Khan and it again went on to be ruled by the Mughals who reigned for a long time. During the rule of the Mughal King Jahangir, the Jama Masjid in Beed was constructed and the legacy of the rulers was carried on by Aurangzeb, the last effective Mughal ruler. Under his rule the governor of Beed brought about some effective improvements in the administration, construction and condition of the district. The assistant of Governor further fortified and safeguarded the city to protect its inhabitants.

It was the most flourishing period for the inhabitants of Beed until it was taken over by Asaf Jah, who began the Nizam Era by establishing the Asaf Jahi kingdom, in 1724. No major changes took place during his reign but during the reign of the sixth Nizam, between the years of 1869-1911, there were major floods, rebellions and famine that plagued the city and surrounding villages.

Districts were created and governors were replaced by collectors and Beed formally became a district in 1883. One of the most popular markets of the city was created on the eastern bank of Bensura River which is now known as Hiralal Chowk. The first famine took place in the year 1900 as a result of a severe drought, following scarce rain during monsoons for 3 years at a stretch.

After this horrific incident, the population of the district reduced remarkably and following the death of the last Nizam of Hyderabad, Mir Osman Ali Khan took over in the year 1911. He tried to bring in many reforms in terms of health, education, government policies etc.

The Nizams supported the British rule and tried to suppress all freedom struggles. In Beed which was a part of the Marathwada region, the first freedom struggle began in the year 1818 under Dharamji Pratap Rao which ended after the capture of the leader in 1829. A rebellion also broke out in the year 1858 which failed miserably as all the rebels were caught. Many such rebellions occurred in the district against the British Raj, which were suppressed including a major rebel in 1898 under Rao Sahab, headed by the Brahmins of Beed. Things finally came into control only after the Independence of India in 1947.

In the year 1948, a year after the creation of India and Pakistan, the state of Hyderabad was adjoined with India following a Military take over and until 1956 Beed remained a part of the annexed state. During this period many communal riots, abduction of women, murders and desecration of Muslim holy places occurred.

The district of Beed remained out of its true place of origin until Maharashtra was created in the year 1960, based on divisions due to linguistics and culture. In the year 1962, Beed finally became part of the Bombay Presidency, which at that time included the present states of Gujarat and Maharashtra.
If history is to be believed then the unstable rulers of the district since the time of its origin have substantially left their mark on the current state of the place. It has seen so many rulers and such a massive variety of cultures that it reflects the essence of those cultures even today.

Comments / Discussion Board - History of Beed