Beed is known for being home to a number of religious tourist spots in the state of Maharashtra. This is the gift the district received for being witness to some of the major historical and mythological events of the country. There are several religions and diverse communities that reside in Beed, therefore its 5 most popular religious spots may include religious buildings of different religions like Temples, Mosques, Jain Temples, Buddhist Pagodas and more. 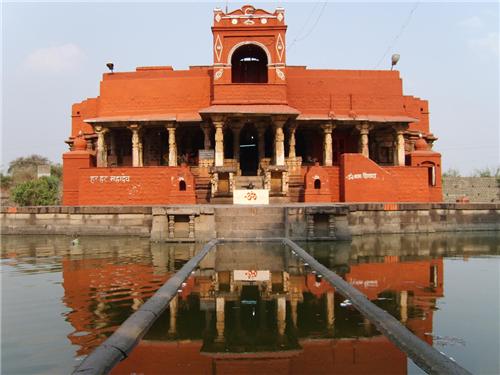 The five, most frequently visited religious destinations of Beed are as follows:

Kankaleshwar Temple- This particular temple of Beed is said to have been built during 1210-1247 by the Yadava rulers, as suggested by its architecture. It is located amidst a small lake and the carvings of this temple and the Ellora caves in Aurangabad district of Maharashtra, are very much alike. Mahashivratri is the main festival that is celebrated with grandeur in this particular temple. It provides residential facilities for the priests including accommodation, water and electricity and parking facilities for tourists or visitors. The temple is surrounded by small snacks stalls, food stalls, flower stalls and stalls selling materials necessary for several Hindu rituals. The temple receives more than 200 visitors on a regular basis which include locals and tourists.

Khandoba Temple- Khandoba Temple, also known as the Khandeshwar Temple is among the oldest temples of Beed alongside the Kankaleshwar Temple. There is contradiction regarding the origin of the temple as some attribute to a Jagirdar of Beed, namely Sultanji Nimbalkar while others believe that it was constricted by Mahadji Shinde.  There are verandas on all four sides of the temple, supported on 32 pillars with a central area known as the Garbhagriha which houses the Shivalinga. There are two 6 storey Dipmals situated at the front of the temple, which are both about 70 feet high with engravings of animals and birds. Apart from these there are several examples of skilled craftsmanship evident in different sections of the temple. Even the surroundings of the temple present a soothing and pleasant experience for the visitors.

Shahenshah Wali Dargah- This mosque in Beed is situated at a certain height which is climbed with 23 steps and has an arched wall around it. The arched wall of the compound has two Minars or pillars on both side of it. The mosque is located at the rear end of the compound at a height of 1.2 meters on a plinth which is also in an arched shape like the wall with two pillars. The tomb is situated within a canopy-shaped structure supported by four pillars and is surrounded by another canopy-shaped structure that is constructed with as many as 12 pillars. This entire structure is quite impressive and the floor of the tomb is covered with colourful, floral marble tiles. The compound also houses a music gallery along with tombs of different Muslim prophets, kings and Maulvis.

Manmathswami Kapildhar- The Manmathswami is another temple dedicated to Lord Shiva and is the burial ground of Manmath Swami, a priest and preacher highly regarded by the Lingayat Community. This temple-cum-samadhi is located at the most picturesque surrounding with a small waterfall in the backdrop. The Samadhi is situated within a small ‘Gabhara’ which is surmounted by a well designed Shikhar. It has images of Lord Shiva painted on it, in different poses of meditation and is surrounded by huge pavilions for pilgrims and numerous trees offering a peaceful and serene environment.

Mohammad Shah Ansari Dargah- The mosque is dedicated to a famous Muslim Fakir, known as Hazrat Maqdum Shah Ansari, who had come to Beed during the reign of the last effective Mughal emperor, Aurangzeb. He had rested at the current location of the Dargah and the tomb dedicated to him is said to have been built by his brother after being granted with some acres of land by Aurangzeb.  It is a popular destination for religious visits by Muslims from different parts of India, especially Hyderabad during occasions.

If you love to visit the grand and ravishing religious destinations of India with an interesting and engaging tale behind each architectural wonder, then Beed is the ultimate destination to fulfill your dreams.